Last night was one of the worst nights I’ve slept in a long time.  We put the boys to bed around 8:30, expecting them to be so exhausted they would crash.  Not so.  I ended up laying with them until 11pm to get Hudson to sleep.  Porter didn’t go to sleep until midnight!  They were tossing and turning and bickering and jostling around. Then they woke up at 4am and were wide awake until about 5am.  Only to get up for the day at 6:30ish.

I had promised them I’d take them back to the beach to feed the gulls so that’s what we did.  My mom came with us and we grabbed some crackers and headed to the beach.  The boys love feeding the gulls. Mom told me yesterday that Hudson was walking around with a cracker in each hand, arms up in the air saying “Here!  Sea gulls.  Have.  a.  Cracker!  Eat. Cracker.  Sea Gulls!”  The whole time never letting go of his crackers. Today he did the same thing.  He ran around with his crackers in his hands but never threw them to the gulls. 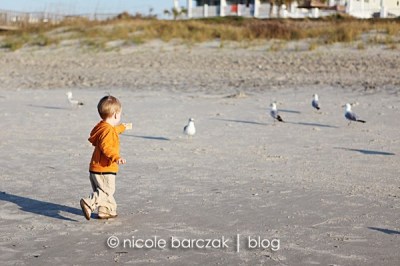 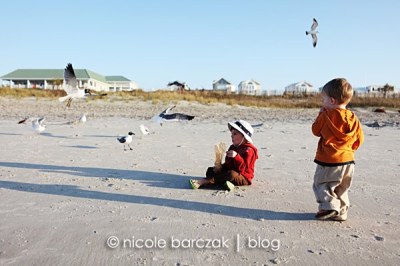 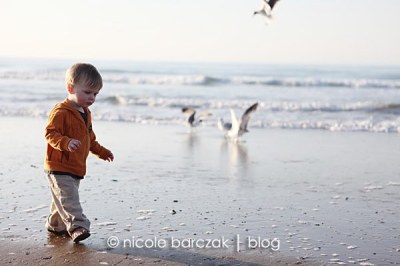 Back home, mom made breakfast for everyone while I went back to sleep. I was exhausted.  I finally got back up at 10am and we packed up to go to the beach for the afternoon.  The beach is so perfect to wear the kids out!  The boys did not stop all afternoon.  Hudson was happy as long as he had his dump truck and green shovel.  Porter loved splashing in the waves and running back and forth on the sand.  He made some friends with some kids near us on the beach. 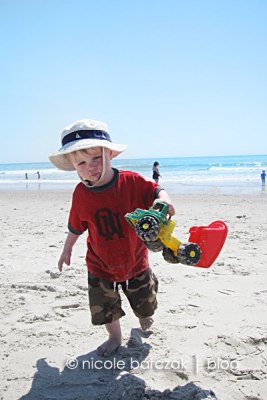 I finally took Hudson back home to wash off and take a nap. He was out within minutes of hitting the pillow.  Poor guy was tuckered out!