I now know God surely knew what He was doing when he concocted this insane house sale this month. After last night, I know there is no way we’d survive in this house with an infant and a toddler. If you remember the floorplan I posted awhile back, you know that the bedrooms are right off the living room… and directly across from the kitchen. So, last night when I was up at 3am to get Hudson a bottle, Porter heard me, woke up and saw the kitchen light on. So, not only was Hudson up from 3-5am, so was Porter. He wanted to “help be a good big brother” and “wake up” he kept telling me.

Speaking of the house situation… we close on our house on Thursday. Yep… less than a week. Luckily, we have next weekend still to move- we don’t have to be out until June 2nd. No news yet on the H house. They countered our offer last week (did I update that?) with just dropping their price about $3,000, so we countered back and raised our offer $2,000. We’ll see what they counter with- we’re most likely going to just take their counter offer- Ryan just likes to play games and is trying to get as much out of them as possible. Good strategy… only HELLO we have no house to move into yet and we have just a week to move so let’s get this ball rolling!!!

Hudson is doing great. He’s such a sweet, content baby (so far….). He rarely cries and when he does he is soothed easily. We did have to take him to the pediatrician today as his circumcision started bleeding. They re-wrapped it and said he should be fine. He weighed 6lbs 14oz. He’s still not eating a whole lot… about 1 ounce every 2-4 hours. 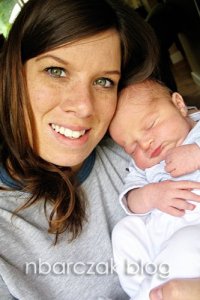 I forgot how much laundry one tiny baby can produce. Last night alone he went through three sleepers, two receiving blankets and a bedsheets. We have to put vasoline on his diaper because of his healing circumcision, so sometimes the pee just runs right out of his diaper. I already have a good load of laundry from just Hudson alone.

I think this upcoming week will be the roughest thus far. I’m still incredibly sore where I was, uh, stitched up. My milk is coming in and that’s hell in itself (more on that later). We close on our house and are moving in with my mom by next weekend, and we’re still trying to get used to the up all night schedule now that the “new baby” adrenaline has worn off. I figure if I can make it through the next week, it’ll be somewhat smooth sailing from then on.

Back to the boobs. Oh man… I feel like they’ve packed on 10lbs each in the past day. My upper back is KILLING me… I feel like I’m hunched over constantly. This is reaffirming my decision to not breastfeed… I feel no guilt. I can’t imagine dealing with the milk boobs. I told Ryan I need to take a picture (with my clothes on, of course!) to remember just how ginormous they got.

Well, I’m still working on those pictures from Hudsons little session. I want to get his birth announcements ordered asap because we’ll be moving next week and I don’t want to have to deal with wondering what house they’ll need to be shipped to. I guess I should get back to work and then get my butt to bed!