Porter had a blast at the fair this weekend. We didn’t make it last year, so the last time he was there was when he was 6 months old. All week we’ve been telling him we were going to the fair to see Monster Trucks and to see the animals in the barn. He was so excited.

When we drove up, he kept saying “I wanna go in there!” When we got inside he was awed by the rides and everything going on. He wanted to ride this upside down around a track ride (for adults)- HAHA! We did let him pick out one ride (tickets were 4/$5… and each ride was 3 or 4 tickets!) and he chose the Bumper Boats. This ride was so cute! All these little steerable raft boats in this knee deep pool of water. Fun stuff! 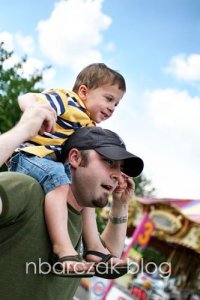 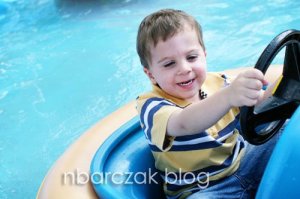 We went through the barns where Porter saw “Wilber” from Charlotte’s Web (he loves that movie) and we saw an enormous draft horse and a duck tried to eat Porter’s shirt. He also got to pretend to drive a real huge tractor and an army hummer… well, ice that boys cake why don’t ya! 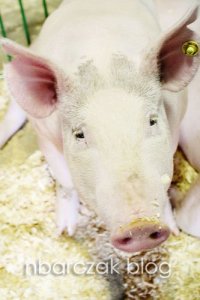 We chowed on way too much fair food (which Porter paid for the next day)… corn dogs and fries and elephant ears and cinnamon almonds and cotton candy oh and a slushee… EEEK! Way too much grease and sugar, that’s for sure!

The Monster Trucks… oh boy. I seriously could not believe that I actually was paying to go see Monster Trucks smash cars. Never in my life did I imagine I’d be attending a rally LOL! Well, it was actually kind of fun, although I wouldn’t necessarily hunt down the next show to attend. I’d take the boys next year- Porter sure enjoyed it.

We were able to get amazing seats- second row (thanks to Erica and Mike who stood in line!) although there was a catch… we got drenched when it poured just before the show started. We were right under the overhang and the gutter— which decided to leak from the excessive downpour. Luckily, it only lasted for about 15 minutes and then the show was on.

Like I said, we were really close. All I could picture was one of those big ass trucks crashing and us dying… at a freaking Monster Truck show. Not the way I pictured going out of this world. We forgot Porter’s ear-muffler things, but luckily Noah’s dad had earplugs Porter used. He was a bit scared at first, but once the trucks got going and doing their stunts, he was all into it. He even jumped up and threw his fists in the air and said “YEAH!” when two of them raced. So cute. 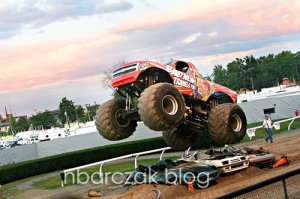 We really wanted him to have a special day all to himself with just mommy and daddy. He’s been such a good big brother and has adjusted so well to not being the only child, but he really deserves some one on one time once in awhile. After the Monster Truck show we asked him if he had fun and he said “Yeah! It was my ‘pecial day!” We definitely have to do this more often with him (and with Hudson once he’s older).

I, of course, had to bug some unsuspecting wanderer to take a picture of us on our “Special Porter Day”