We all were so tired from the previous day that we slept in until 9am. The campground was still pretty quiet, but I could hear the distant sound of engines driving by going to the dunes already. Porter and I got ready and we went on a walk. I stopped by this little “strip mall” that has a t-shirt shop, a toy store and a candy/popcorn store. Its right on a pond where there are bumper boats, miniature golf and go carts. I attempted a little photo shoot with Porter and I got a few cute pictures. 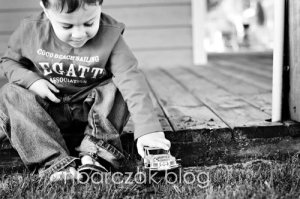 I borrowed Jane’s BabyHawk carrier and got a couple compliments. I really like the carrier and I think I’m going to invest in one. It seems like it’d come in handy during times where we don’t want to take a double stroller… we can just take our Chicco fold up stroller and put Hudson in the Hawk. 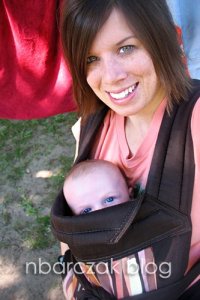 I’m not sure its intended for front facing use, but Hudson seemed to prefer that way and I assume was comfortable enough… 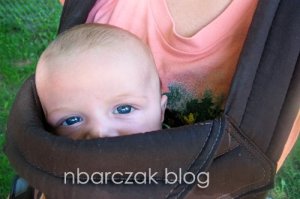 After we were all ready for the day, Ry’s parents joined us to take Porter to ride on the Go-Carts. He rode with Ryan and Dave drove a car too. Porter had a blast. They had a dummy steering wheel in the “double’ cars so that the kids feel like they’re driving too. Then we went next door and the guys rode the bumper boats. They got soaked!

After our nap, we went over to Cathy and Dave’s hotel to swim. Not me, of course. I’m on a no-swimsuit summer. I did snap some pictures, though. The pool was 1’10” in the shallow end and only about 3′ in the deep end- perfect for kids! Hudson took his first dip in the pool, too, although he wasn’t too excited about it. 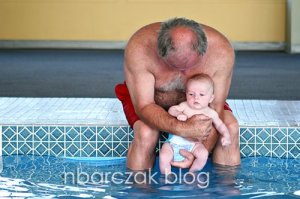 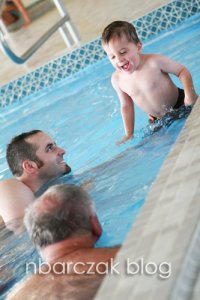 After swimming, we decided to do ice cream for dinner. We went to Whippy Dip and then Porter played on the playground. He rode a tire swing for the first time and loved it. 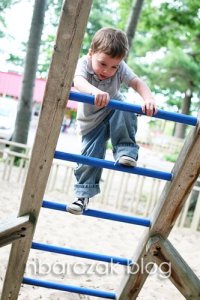 It ended up looking like a daycare center there- there were about 4 other little boys and 2 little girls. Porter was following one little girl around and then stopped to watch the “pack” of boys run around this dirt track that was made for remote control cars. He watched them for a moment and then got a huge grin on his face and turned to follow suit. He and the little girl ended up running around for awhile together, copying eachother.

We finished out our night with a campfire and hotdogs for “desert.” I can’t believe how much stuff we packed into one day. Porter was whipped, as were all of us adults. I’m glad we decided to head up a day early- Thurs night- rather than Friday morning.