We went to pick up Porter today from Lori and Don’s. He was great staying there for three nights. My 2 year old taking a 3 night sleepover away from home… an hour away from home at that. They had a blast together- they made homemade ice cream, cookies and played in the slip n slide and sandbox. Porter earned a lot of stickers for going potty on the big boy potty. I’m so excited that we’ll be done with diapers with him soon!

I wanted to write down some funny things he’s said lately. The kid cracks me up… I love how his mind works. He’s SO literal and so serious about things its hilarious.

On the car ride up to Loris on Thursday:
“I gun gwash im. I need gwash im wid a nakin.” Can you translate that? Hint: It involves a bug on the window in the car.

At Loris, Porter had went into the bathroom to poop. He must have stood up and then sat back down and his shirt got in the way, so there was poop on his shirt. Ryan went in for clean up duty and when he tried to take Porter’s shirt off Porter was so upset saying “I don’t want poop on my face!!”

On our way home we drove by a car dealership….
Porter: “That’s Simon’s work” (my friend Barbie’s husband works at Extreme Dodge and that’s where we traded the Fe in for the Pacifica).
Ryan: “No, Simon works in Jackson.”
P: “He gave me popcorn” (one of the times we were at the dealership he brought Porter a donut and popcorn)
Ryan: “Yep, he did.”
Porter: “It was good. (licks lips) MMM. De-duh-licious!”

A phone conversation with him the other day when he was at Lori’s:
Me: Are you having fun?
P: Yes I am (more like yeseye yam)
Me: I love you
P: Yes you do

Last week Ryan asked him if he was lying about something and Porter said “No… I not a lion!”

Some of his most common things to say are:
“Maybe…” (as in “Maybe we go to Target? Maybe I can have cookies? etc etc)
“How about” (as in… How bout we go outside? How bout I go get the keys..)
“Because…” (as in… Porter, why are you using that angry voice? “Because I am”) 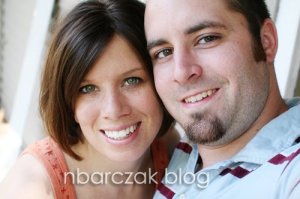 Of course… can’t forget those nieces!