Tonight we went to see Santa. I was pretty sure Porter was going to freak when we got near him. As outgoing/active/wild and crazy he is, he really is a shy guy when it comes to new people. He takes awhile to warm up. We talked about seeing Santa, how he’ll be coming to our house on Christmas Eve and come down our chimney to bring him some toys and we looked at our last years’ scrapbooks at pictures of him and Santa. I think he was pretty prepared and pretty darn excited to see him.

When we got to the mall he kept asking where Santa was. We finally approached his little “area” and Porter was peering around the people in line, hoping to catch a glimpse of Santa. He was so surprised to see him and just stared at him. I loved watching it… it was like experiencing the magic of Christmas through him. I thought for sure at this point he’d turn back, hide behind our legs and refuse to go see him. Nope. He walked right up to Santa and took his hand to shake it and say “Nice to meet you” and got right up on his lap. He stared at him and studied him… it was totally a Porter thing to do. He told him what he wanted him to bring him (a harmonica) and he and Santa discussed what kind of harmonica (a short or long one….. are there different ones?!?!) and Santa told him it takes lots of practice to play a harmonica. 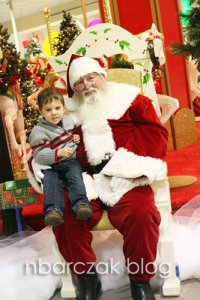 We then plopped Laid Back Bessie up there and he just checked out Santa and stared around… typical… such a chilled out kid. (Last week we went to the doctor and Hudson just studied the doctor as she looked in his ears and throat and eyes…. he wanted to reach out and grab her stethescope but was very cautious and hesitant to do so… you could tell his moves were very calculated and thought out… that he was deciding whether or not to grab at it…. he’s so funny)

Anyhow… we managed to get a couple snaps of the kids (I always just take a few pics… I cringe at the $20 snapshot with Santa.. OUCH! Thank goodness they let you take your own snaps) and they’ll be a-ok for the scrapbook. 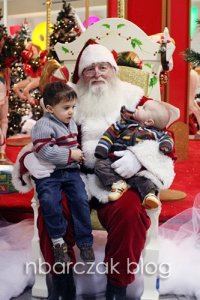