Hudson is slowly coming into his own funny little personality. Its starting to look like we have another comedian on our hands. He’s been doing this silly little head tilt… if he can’t see around a corner or in something or what not, he cocks his head to try to get another view of it. I wanted to catch this on camera and was cracking up when he started doing it to Ryan while eating lunch one day. 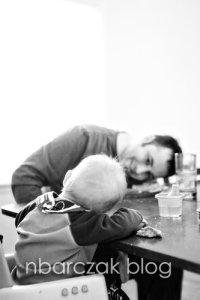 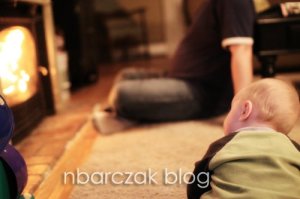 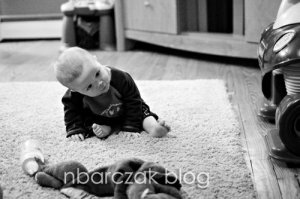 Last week he got his first boo boo…. he was playing in Porter’s room and pulled a metal truck off the shelf and onto his nose. It was bleeding and I kind of freaked out thinking he chopped off the tip of his nose. I tried putting a band-aid on it (HAHA) but that didn’t work. Day 2 it wasn’t so bad looking… I’m keeping Neosporin on it to try to minimize any scarring. Poor bubs. 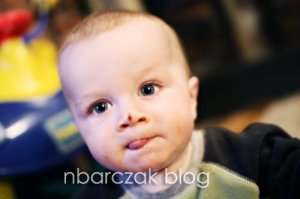 He’s been doing this crazy loud screech lately. Which is kind of cute/funny/amusing at home but not so much in public. He gets so excited its like he can’t contain himself. He loves Porter, too… thinks he’s super funny.

He’s starting to get opinionated about wants… kind of ironic that he’s been so laid back up to this point and lately if something is taken from him that he wants to play with he gets ticked. He’s still so easy going, its kind of funny that all of a sudden he flips a switch and gets mad. 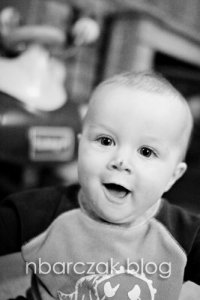 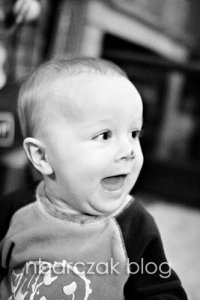 He’s slowly becoming mobile. At 9 months old. So funny to me! He mostly has been scooting around on his butt… he’s only gotten a couple feet away from where he begins though. He reaches for things but he hasn’t figured out how to get that one leg out from underneath his body.

The other night Porter was playing with his fishing pole in the living room and left it within reach of Hudson. He scooted himself over and stretched way out and SCORE! 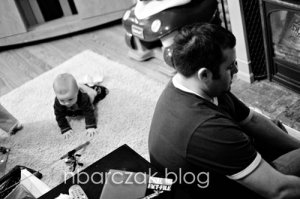 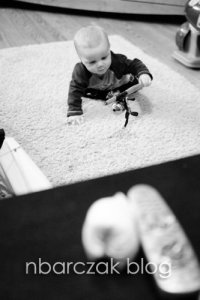 Zoey has been spending a lot of time at the neighbors (Linda really wants her but is working on convincing her hubby), so we’ve been letting Ramsey spend a lot more time in the house with the kids. She’s so patient with them… I totally know the thoughts going through her head are along the lines of “Oh holy hell… holy terror” and “Not again….” and “Lord, help me” but she puts up with the chaos and running around and craziness that Porter submits her to. I swear, we’ve spent the past 2+ years drilling it into his head to be nice to the dogs, don’t hit, don’t chase… but what does he do? GRR. 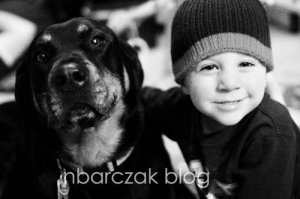 I think her favorite part of the day is mealtime…. lots of freebies from Hudson, of course.

I love his face in this one…. like “Eat your heart out, Ramsey!” HAHA! 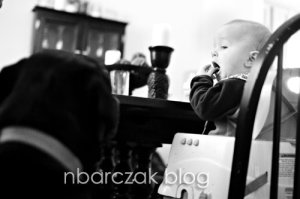 What a good dog…. waiting patiently for her “OK” to take the piece of bagel 🙂 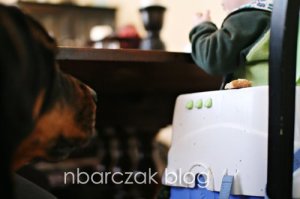 On any given day, you can usually find a row of parked cars and trucks SOMEWHERE in our house…. 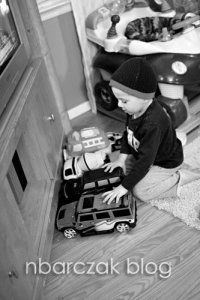 Porter…. Mr. Innovative. Wanted to eat his cereal in the living room (its not uncommon for us to eat breakfast in the living room… we’re pretty on the go in the morning) and he brought his chair in from the playroom and then put his stool underneath to rest his feet on. 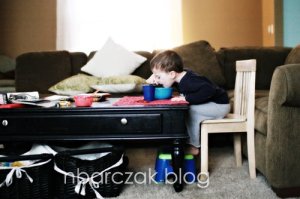 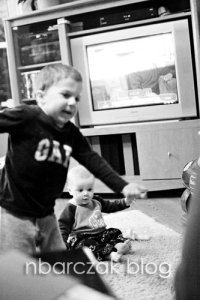 And one of my favorite parts of the day…. the end. Bedtime stories are usually read in bed, but tonight Ryan and Porter cuddled up on the couch by the fire and read No! David!…. in which I think Porter highly identifies with 🙂 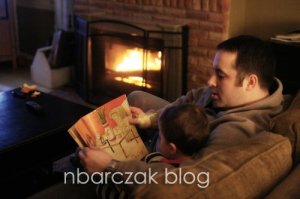