I’ve been meaning to blog lately but I never seem to muster up the energy to sit down and journal.  I am nearly a week behind!
CHAPTER 1:   Our New Addition (aka… my brother moves in)
My brother has been struggling to finish up school (he’s going to an options high school) and is in need of a little more structure and support in his life at this time.  He finally decided to ask for help and has moved in with us for… who knows how long.  Ryan and I adore my brother… he used to stay with us a lot on the weekends when he was 12/13/14 and now that he’s 18 he kind of has had little time to spend with us.  Porter is LOVING having him here.  He is his little shadow.  And we love having him here too.  The line between “friend/sibling” and “mentor/parent” is kind of a fine line and we’re working out kinks as to how many boundaries to give him (because, really… he IS 18 but… it IS our house and he IS still in “high school”).  So far, so good.  He has been very respectful and following rules and keeping us updated as to where he is.  He’s also doing great with his school work as well, which is our main goal….get his high school diploma.
CHAPTER 2:  Step On a Crack… Break Your Daddy’s Back
Not really…. but really.  My dad broke his back.  He was slightly… inebriated…. and fell off a deck.  Nice.  Broke 3 ribs and suffered a T11 spinal cord injury.  He had surgery on his spine and the surgeons said the severity was worse than they expected.  It was completely severed and was basically being held onto by nerves and tendons.  They told him its a miracle he’s not paralyzed.  I’m so thankful his outlook is good and he’ll probably only have a bit of rehab to go through.
CHAPTER 3:  Superhero  Birthday Party!
Porter’s 4th birthday is coming up soon…. I can’t believe he’s almost FOUR!  Where did the time go? WHERE?   He wanted to have a Spiderman birthday and I was… uh… not that excited about planning a Spiderman birthday.  I finally talked him into a “generic” Superhero party… complete with custom Superhero Capes for all his friends/cousins.  I’ve been a sewing maniac this past week and am having a blast making these cuuuute capes!  I also plan to make this super duper fabulous rainbow cake and attempt to cover my buttercream frosting with some slick looking fondant.  Hmm….  I just LOVE planning/decorating for kids’ birthday parties!

CHAPTER 4:  Our First Case of Strep
It seems like strep throat is such a common sickness among kids and amazingly… my kids have never had strep (just watch… Murphy’s Law of Blogs says we’ll be plagued with strep from here on out just for me saying that….).  And I think each of the boys have only had one ear infection in their lives.  Pretty darn good, if you ask me!  (Heh heh… I love debunking the “formula fed babies aren’t as healthy as breastfed” theory).
This past week the boys have had a snotty cold.   I wasn’t going to take them in as I figured it was just a cold.  I hate paying doctor’s co-pays for them to tell me to “let it run its course”.  Well, over the weekend Hudson was such a butt-head.  He’s been throwing Super-Tantrums over nothign at all.  Don’t get his cereal to the table fast enough?  He pounds the table, kicks and screams.  Have to heat up his oatmeal… heavens forbid just feed the kid right out of the packet… he’s throwing his cup and tipping chairs!  He’s been a maniac.  And he had been poking at his right ear.  I’m not all familiar with ear infections (because its a rarity around here) but I figured…. poking at ear could = ear infection.  I decided to stay home from work today and take him in.   Of course we couldn’t get an appointment until 1:15… prime naptime.  UGh.  I almost didn’t take him in.  We were leaving Target and he had been acting pretty normal.  But, turns out he has Strep.  I’m glad I took him in and I’m glad there’s at least a reason for his crankiness all weekend.
CHAPTER 5:  Flooded… again… and again… and again….
In the past 2 weeks we’ve flooded our laundry room 4 times!

Not really… but I am starting to think I have ADD or something.  I have so many projects and ideas and things I want to do and there just isn’t enough time in life.   Let’s see…
CHAPTER 7:  A Few Pictures

When Heather and I were little we used to lay in the bathtub and say “CROCODILE DUNDEE!”  while our ears were submerged underwater.  Porter is carrying on the tradition… 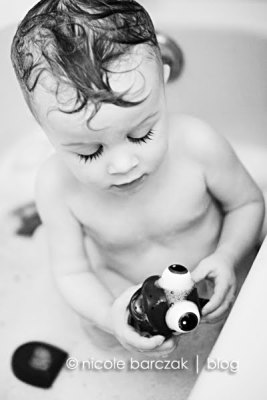 CHAPTER 8:  Fourth Birth Under My Belt
Obviously not my own birth… but my 4th birth being the photographer.  I’m hooked.  Seriously hooked.  I’ve photographed 3 of my friends births (and… possibly a 4th this summer???) and I’ve had one client birth session.  Have I mentioned I’m hooked??  I just love love love capturing these moments for people.  They’re so much more special, and fleeting, than typical sessions.  I looove it.
LeeAnn was noting how neat it was that if I am able to do Jane’s birth I’ll have seen a side of my BFF’s that not many other people have seen.  I agreed and then asked… “So, does that mean I owe the 4 of you a sit-in on my next birth?”  LeeAnn suggested I give birth in one of the surgery rooms with an observation area above where they can all sit and watch.  HAHAHA! 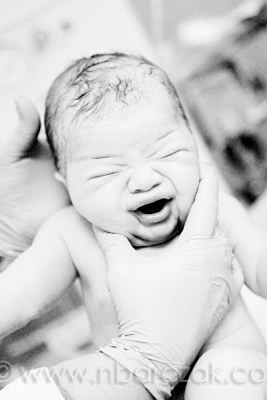