Porter’s 4th birthday party was a success…. tiring, yes, but also a complete success.  Most of the kids LOVED the capes and masks.  Porter- not so much (but does that surprise you…. he’s like Mr. Anti-Fun when you’d think the opposite).  He wore it for a picture and then he said it was “choking him”.  *roll eyes*  Lukas and Donnie wore theirs the entire party… so did many of the little chicas!  I was happy… and even happier that I was able to give out party favors that will (hopefully) actually get used rather than tossed after a day or two. 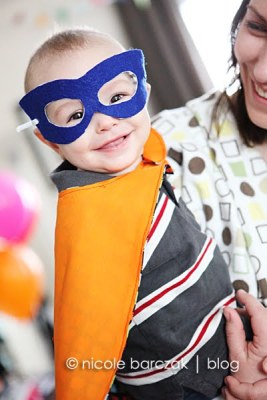 Porter’s cakes were…. time consuming.  I started making them Saturday evening and finished them up Sunday.  This was my first try at a fondant covering and well… I’ve seen MUCH better but oh well.  It works.  You can see the dents where Hudson kept smashing his fingers into it.  He’s really into pushing stools up to things (hmm…. where does he get THAT from??) and kept trying to eat the cakes before the party.

Check out this darling grin from my birthday boy!!  He did pout when we sang to him but was sooo excited about the whole birthday thing.

Yummy rainbow cake inside…. (the other cake was prettier…. Porter wanted yellow in his cake but the other one I substituted the yellow for purple).

Hudson… ohhhh he loooved the ‘scooperman’ ice cream… I think he had 3 or 4 scoops!

Duncan had to get in on the party scene too… I had just put the balloons in the dining room and walked out into the living room.  Turned around and here comes Duncan trotting in with the balloons in his mouth. 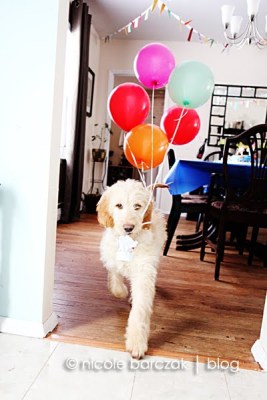 All in all… SUCCESS!  Although next year I’m certainly contemplating Chuck E Cheese or the Treehouse.  I feel like I spent my entire weekend preparing for this 2 hour party and then spent the entire evening cleaning up from it!