I just realized how long its been since I’ve blogged!  Almost a week.  Yikes.   I need to get back to more “microblogging” of those little moments that melt my heart.  The boys have been up to so many cute things lately but of course now that I’m at the computer I can’t think of them.  Such is life.

The big things, though, I can think of.  So that’s what I’ll recap.

Babies.
Two, that is.
Sunday Jane had her babyshower for the twins.  I still can barely believe she’s having twins, let alone identical twin girls.  I can not wait to meet these little girlies and take their pictures!  Jane is as adorable as ever…. if anyone can rock being pregnant with twins it is Jane.  She looks SOOOO cute with her big ol’ belly…. it is THE cutest twin belly ever.  Check out this snapshot of it at the cottage…. 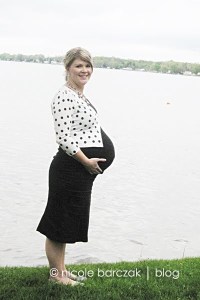 After Jane’s babyshower we had Supper Club at the cottage.   You know, the cottage.  The infamous cottage.  Yummy tri-tip dinner sans kids (well, except for a few tag-a-long bubbas but they weren’t mine so it doesn’t count LOL!).  Lovely evening, as always. 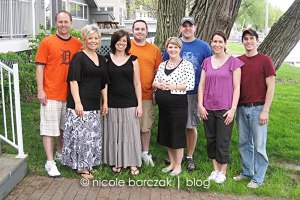 I’ve become “a fan” of this new craze… Zumba.   Oh my word…. what a kick ass workout.  LeeAnn asked me to go with her and I was so nervous…. go ahead, google “Zumba” and watch some videos on YouTube.  You’d be nervous.  Its a Latin-Hip Hop-African mix of dance/aerobics workout.  Amazing.  I’m no dancer, that’s for sure, and there were quite a few moves that had me stumped but it was a lot of fun.  There were even some older women and some very heavy women there and that was awesome!  I was literally sweating 5 minutes into the class.  Its an hour long and it literally works like ever muscle you could ever thing you had.  I’m hooked.  I plan on going twice a week and hopefully will get this bod back in shape.

Baseball.
Ryan’s friend Scott gave us 4 tickets to the Lugnuts game this evening.  We decided to make a family outing of it and take the boys.  We both knew we would never make it through the entire game, but since the tickets were free we didn’t care if we left early or not.  The boys were so excited to go to the baseball game.  I didn’t tell Porter until I got home from work.  I knew he’d bug me every hour if I told him ahead of time.

Once we got to the game we were right at 3rd base about 5 rows up.  Porter was convinced he was going to catch a foul ball (we brought his mitt, too, and he kept trying to get the 3rd base coach’s attention for him to throw him a ball LOL!).  We had popcorn and cotton candy and enjoyed the 3.5 innings we made it through (HAHA!).  I think the boys just had a great time seeing everything going on.  I know I did.  And turns out tickets are super cheap (like… under $10) so we might have to make this a Daddy/Porter date outing sometime. 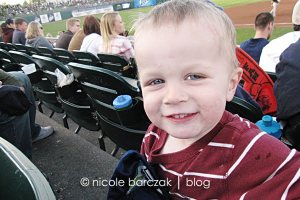 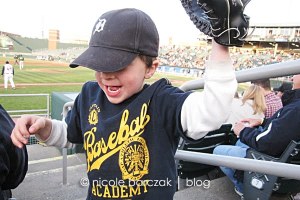 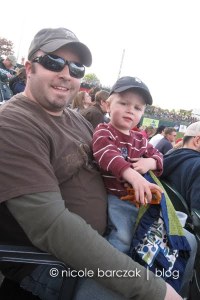 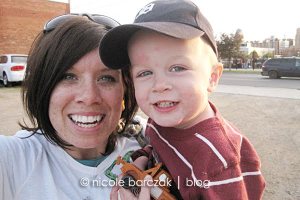 On our way back to the car, a guy stopped us saying “Kid, hey Kid” and was handing a foul ball he’d caught to Hudson.  Hudson was sooo excited to get a baseball.  When Hudson and I caught up to Porter and Ryan, Porter was kind of bummed he didn’t get a ball.  Luckily, Hudson was willing to share. 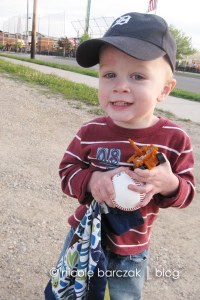