Last night Ryan came home from work and was super motivated to get started on the kitchen floor demo.  I swear, I feel like there is ALWAYS something in this house under demolition.  Ridiculous.  But, I don’t think I’d have it any other way.  I love change, and I love doing home improvements.  Its one of my favorite parts of being a homeowner.  I love personalizing my home and making it “us”.

We started chipping away at the tile around 5:30pm.  Porter was SO into helping.  He was cracking both of us up… he was more motivated than the two of us combined to get things going.  He wanted to be right in there chipping away.  We finally decided to call Ryan’s dad to come pick the boys up because, bless his heart, Porter was so willing to help he was getting in the way.  Dave picked the boys up around 6:30 or so and at that point we were thinking it’d be 1am before we’d get this floor done. 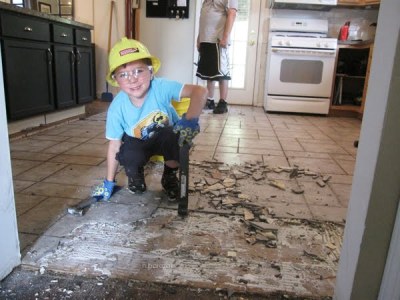 Then Ryan struck gold.  He got his chisel under the subfloor and the whole darn thing started to come up, tile and all!  We ended up ripping the floor up in about three 4’x8′ sections.  It was awesome.  We were done by 8:30pm! 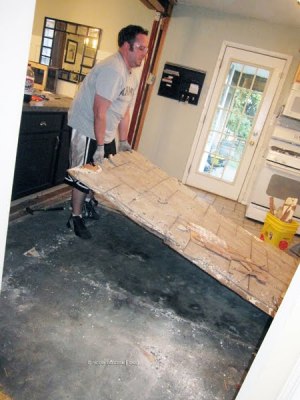 This morning I thought I had a session but it turned out its tomorrow morning.  I slept in until 9, Ryan went into work for a couple hours and got home as I was waking up.  I then went over to my grandmas to help her with her kitchen (she’s painting), and Ryan laid back down to sleep.  Bad idea.  After I helped Grandma I went to get the boys and got home around noon.  Ryan was still asleep.  Nothing had been done in the kitchen.

The boys had lunch, Ryan woke up and had lunch with us and then I put the boys down for a nap.  I was completely thinking Ryan would get into gear and get this floor finished while the boys napped.  I went up to lay down with Hudson because he was being difficult. I fell asleep, woke at 4:30 and found Ryan sleeping with Porter.

This TICKED me off.  So I decided I’m done waiting for him. I’ll do the damn floor myself.  We started this “remodel” in January.  Its been EIGHT months.  My god… we could have had a whole house built in 8 months!

Of course, when Ryan got up and saw me laying out tile he was pissed.  I’ll cut the story short and just say that this night was not pretty around here.  He finally really got started on the floor at 7pm when his dad came over to help him and it is now 11pm and he’s just beginning to get the tile down.  I had to lay out the tile completely to get the pattern I wanted… slate varies so much that I wanted to make sure the colors and variations flowed well. We got a multi-colored slate, and it really pulls in the maple from the cabinets as well as the greys/blacks from the countertop and island.  I can’t wait to see it finished! 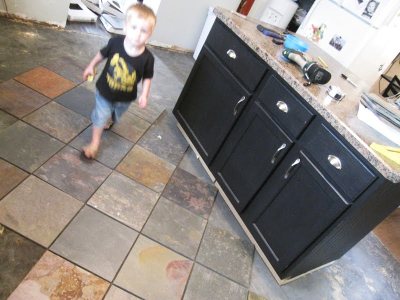 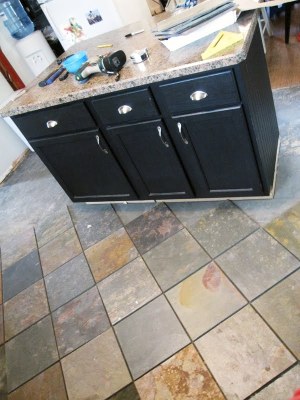 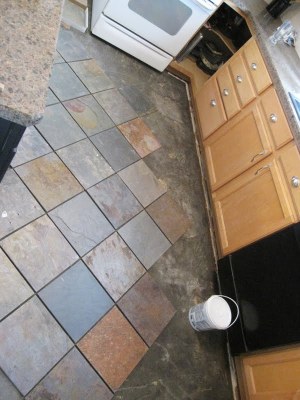