Skip to content
Porter, school, the things they say

This afternoon I received an email from Porter’s teacher…. with a picture of him playing blocks.  My heart swelled and it just made my day.  Marleen always sent pictures of Hudson during the week and I loved having little glimpses into what my children are doing while I’m at work.

When I got to school to pick him up, Mrs. Slat was talking in the hallway with Maria and Porter (she was meeting me there with Hudson, and went to get P in case I was late).  Mrs. S excitedly asked if I’d received the picture and told me that she specifically had her husband show her how to take pictures on her phone so she could take a picture of Porter and email it to me during the day so I would know he was doing fine.  She gets Teacher of the Year award from me already! 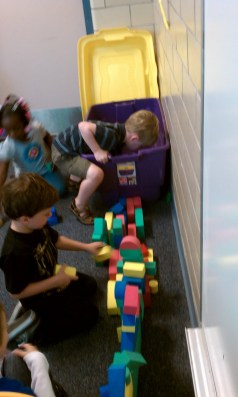 In the car, I’ve been trying to pry every ounce of information out of Porter as I can.  I’m so curious about his day and how he’s reacting to things.  I have been telling him, “I’ll tell you all about my day if you tell me about yours…” and today he went into so much detail I just fell in love.

“We played outside and we had snack… we had watermelon and cantaloupe and graham crackers and juice boxes with the little straws again!”  (he’s totally in awe of the little straws that they get with the milk cartons at school HAHA!)

“We played on the big plastic climbers outside and I got all sweaty and then we got to get drinks out of the drinking fountain and we had to use a stool to get up to it.”

I asked if he made any friends and he said “Yep!”  I asked his name…. “I don’t remember his name.  I call him Buddy.”  THAT cracked me up.

“Some of the kids were making guns out of Legos. Mom, we don’t play guns at school, do we?  Mrs. Rich told them not to and she took the guns away.  I wasn’t playing guns.  I was playing cars with my buddy.”

And best of all… he told me he loooooves school.  Melt my heart.  Thank you, Lord.