So this past weekend I decided I wanted to touch up some dings on Porter’s wall that he and Hudson had made by throwing their wooden ABC blocks at the wall.  Back in November I’d bought a quart of his wall color paint for touch ups along with a quart of green with intentions of painting the top 18″ white with a dividing green stripe between the tan and white.  I never got around to it and really wasn’t intending on doing it this weekend.
HOWEVER… once I patched the dings (with tile adhesive nonetheless… DUH), re-patched them with the correct material and then primed them and painted them with the new quart… I realized the paint I’d had mixed was actually a shade or so darker than his walls.  It looked terrible.  I really had no other choice but to repaint his whole room.  And I figured since I was going to repaint his whole room I should do the white and green stripe.  While I’m at it, why not make the license plate decor for his wall as well?
Let’s start with the wall plaque thingy.  It was super simple to make.  I bought 1/2″ plywood type material in a 4’x2′ piece ($5 or so).  Then I bought two 8′ sections of this tiny trim (which is not called tiny trim at Menards… I’m not sure what exactly its used for but it was about 1 1/4″ by ohhh 3/8″?) at $3 each ($6) and then screws ($2) and tiny nails ($2) and picture hanger things for the back ($1)… I realized I’d created a kind of pricey project after adding in the cost of three of the license plates I’d purchased ($8, $7 and $2).

Ryan was astounded that I seriously wanted him to make this Saturday evening at 8pm but I was serious.  So I took my wood and trim out to the garage and made it myself.  I used the jigsaw to cut the plywood to size, and the table saw to cut the trim.  I did a 45* angle on the corners but I suck at it anyhow and it still left some gaps.  I wasn’t about to re-cut so I decided I’d look for some wood filler.  Turns out we didn’t have wood filler, but Ryan came up with the fabulous idea of mixing wood glue with sawdust and packing it in the cracks.  We’re ghetto like that.  It worked like a charm, though! 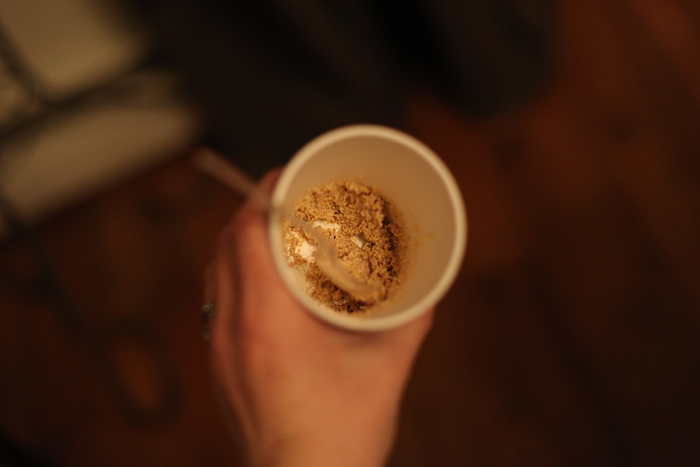 It’s not beautiful by any means but I wasn’t too concerned. I was screwing in old beat up license plates to it so the more jankety the better, right?  I found some random screws to make it mis-matched and screwed the license plates on.  Oh, I painted it an espresso color as well.

I love how his room turned out!  It took a bit longer than I’d planned but I really like it.  Here are pictures of his room before… 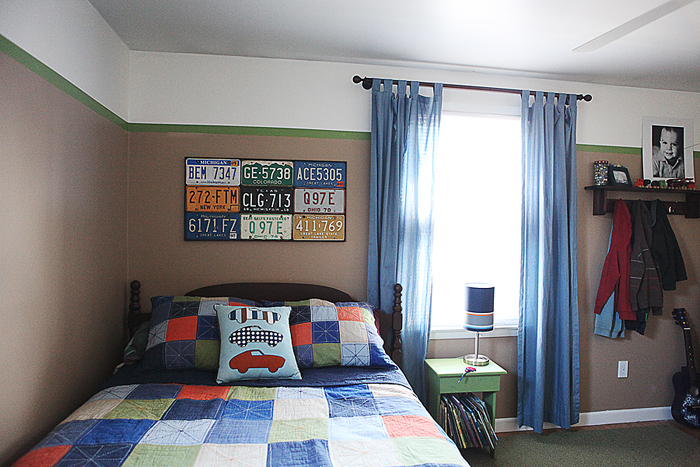 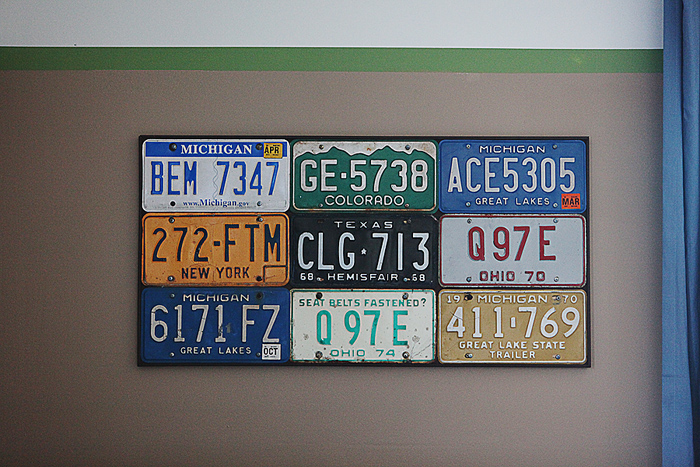