Skip to content
school, sibling love-or-hate, the joys of boys

The boys have been getting along SO much better now.  It is hilarious to hear their conversations and the things the come up with.  And even though they have their spats, they seem to be understanding each other a little more (though a lot of it is Hudson being… 3… and a brat…).

The other night I sent them to their rooms to play because I needed quiet while I made dinner.  It had been that kind of day.  They whined they were bored etc etc… so I threw out a few ideas for them to do upstairs, one being make a fort out of Hudson’s bunk bed.  So, that’s what they did!  They played for quite a bit in it and at bedtime they begged us to let them sleep in there.  Only…. they weren’t both sleeping on the beds.  No.  Porter took the bottom bunk, which was all blanketed in with quilts.  And Hudson?  Well, he was sleeping on the floor UNDER the bed, in a sleeping bag, with a bunch of baby blankets he found in a bottom drawer of his dresser.  He promised it was comfortable.   We did let them sleep in there and surprisingly they fell asleep!  It was so cute.

Uh, yeah… don’t mind the unfinished wall behind Hudson’s bed.  That project is only 3 years in the making.  Poor kid.  And its not like its even that difficult of a project!  Someday…. lol! 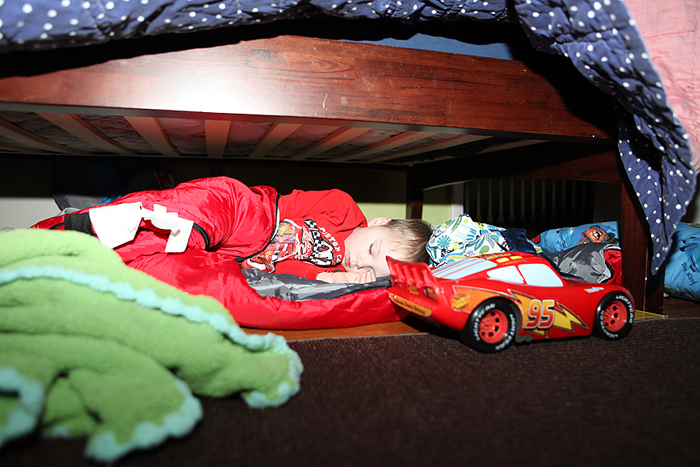 Tonight, however, they were at each others throats.  Heather is in CA for Jon’s graduation from marine’s boot camp, so Addisen is staying the night with us tonight.  She gets along so well with the boys… she is so not a prissy girl and I love that about her (and I so hope that our little girl is not a prissy girl either… though I’m not sure with two rough and tumble brothers she could possibly ever end up being prissy HAHA!).  She keeps right up with the boys and loves playing with them.  They took a bath and then the fighting began over whose room Addi would sleep in.  Porter wanted her to sleep in his room on the floor, and Addi wanted to (though I pretty much think only because she LOVES the rats and they are in Porter’s room).  Hudson didn’t want to be left out so he wanted to sleep in Poe’s room on the floor too but Porter didn’t want him to.  So it was quite the drama for a bit.  We let Addi try out the floor with the condition if she got up she’d have to go sleep on the top bunk in Hudson’s room.  10 minutes later I was moving her to Hudson’s room HAHA!  And then she and Hudson spent the last hour and a half talking and laughing and making all sorts of noise upstairs.  I let them, though… its a special night to have your cousin stay!

Tomorrow morning is sure to be crazy… I have to get Porter to school before 8:15 and then take Addi and Hudson with me to the vet to have Cooper spayed.  Yep… buddy boy gets the ol’ snip snip tomorrow!

Monday I start another grad course… something to do with teaching Reading and Writing to English Language Learners.  My plan was to ditch the Master’s courses and get an alternative certificate to add onto my certification, but after talking to my advisor I have decided to stay with the Master’s but only focus, right now, on getting my required 18 credits (Masters Degree is 36).  Though I technically have only 6 years to finish the required Masters courses, they won’t wipe them off my record per se.  I will have to reapply, though not as formally as the first time- basically stating why I’ve sat out for X amount of semesters.  And if any courses were added/changed to the program I have to complete anything new.  So… that took a big weight off my shoulders. I was worried about losing the credits, or being penalized for not completing in a timely manner.  I so want to focus more on my kids right now, and once I complete my next 4 classes (which I’ll need to get my 18 credits to move from provisional to professional license), I’ll just take classes as I can.  It will all depend on where I am at that point… I may be part time, I may be full time, I may be staying home, I may not even be in teaching anymore!  I just want to take it one step at a time and slow down and soak up the next few years while my (littlest) kids are home.   The one thing I’m excited about is the Masters in Reading, which is the program I’m doing, will also give me a Reading Specialist endorsement.