I woke at 6:15, hearing Porter dinking around in his room. I walk to his room to find the light and lamp on, and him playing with all his little plastic farm animals. He is wide awake and says “Hi momma! I play animals!”

I sang him Happy Birthday (in which he grinned ear to ear!) and then helped him pick up his animals and I tucked him back in bed. He slept until nearly 8am. What is up with him getting up so early? Ugh.

He woke with a cough and a stuffy nose. Go figure. Poor little guy coughed the whole car ride to Nina’s house. He spent the day with her, and was definitely not feeling well. He didn’t take a very long afternoon nap, and when I picked him up his cheeks were flushed. I feel horrible when he doesn’t feel well. Cathy said he had a great appetite for snack… ate a whole apple, as well as cheese, ham and crackers after nap. He also go to talk to his Aunt Lori and cousins on the phone, and they sang him Happy Birthday!

Porter and I met Ryan at Maggie Moo’s and Porter got to pick out his own ice cream and toppings. He wanted “Lellow” ice cream, so he chose the Mango Sherbert. He got marshmallows, chocolate sprinkles and “gummies” (mini gummy bears) on it. He was so proud of himself. 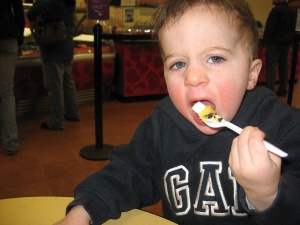 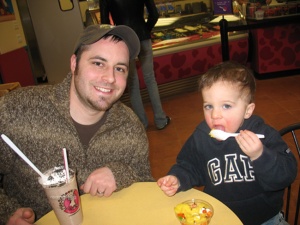 After our ice cream, Ry headed off to class while Porter and I went to Target to pick up diapers and wipes. They do not sell the stinking Huggies Overnights anymore. At least not at Target. Ugh. Porter pees a ton at night, so we’ve been using the Overnights. (Yes, this is because we let him have a sippy of water beside his bed… yeah, yeah…. potty training will be hell with that habit- I know). So, I picked up regular Huggies (I’ve been saving coupons for all brands of diapers and have been calculating the cost per diaper instead of just assuming its a good deal. Most Huggies/Pampers are like 36cents/diaper. I got Huggies for 23cents/diaper today. Yay!

Back to our evening…

We picked up some Triaminic cough/cold thin strips as well. I know they say the cough cold meds don’t work for little ones, but my word I feel so bad I feel like I should at least attempt to help him feel better. Porter normally LOVES taking medicine. However, he was not a fan of the thin strips that dissolve on his tongue. Oops. After that, he threw a fit taking Motrin before bed. Darn it all.

On the way home I told him I had a present for him at home to open. I figured he could open one of the three presents we got him on his birthday day. On the way home I asked him what he thought his present was. He’d say “Chocolate” or “Hummer truck” or other miscellaneous items he thought of. He was so excited to get a present, and even more excited that he got a fire truck! 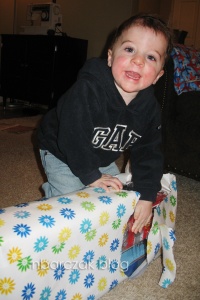 Bedtime was not fun. I wanted him to take a bath- it’d been quite a few days and I figured the warm water and nighttime bath bubbles would be good for his chest/nose and help him relax before bed. He didn’t want to take a bath. He wanted his freaking Lightening pajamas (Cars…) and screamed the whole 5 minutes he was in the bath. He got so mad he was slapping his own mouth.

He’s been up a few times already, after a rough time getting to sleep. I know he feels like crud. I hope he gets over it quickly.

Other than being sick, he seemed to have a great day. Oh, a funny thing he said in the car:

P: Oohhooh!
Me: What do you see?
P: Nevermind. Just a yellow truck. Not hummer truck.

“NEVERMIND!?!” Where the heck…

A: Happy Birthday Porter
P: Open presents!
A: You opening your presents?
P: Open fire truck
A: Oh, you got fire truck?
P: Porter open it. It stuck. UGHH try open it. (he was trying to unscrew the screw that was holding the truck in the packaging).

My mom was cracking up at them. They say the funniest things to eachother.