So we did go. The morning started out rough as I’d woken way too early and was cranky as was Porter. I was rushed getting out of the house because I’d spent forever on the phone with Ry’s credit card company trying to cancel his credit card as well as venting on my blog. We made it to Meijer to meet Cathy and I ended up moving his seat to her van as the straps in her carseat were too loose for P and the only way to tighten them was to uninstall the seat and adjust the straps from the back(its an older seat) so it was easier to just move his seat over to her van but still a marathon in itself LOL!

We got on the road and after spending the whole ride wondering why her dome light wouldn’t shut off, as well as 15 minutes in the parking lot (ok… 30 minutes if you ask my side… 1 minute if you ask her LOL!) trying to figure it out she finally pushed the light to turn it off (something I had tried in the van but I had been pushing on the wrong side of the light). We got a good laugh out of that- about what dingbats we were standing beside the van peering in wondering why the back lights all turned off when the doors shut but the dome light didn’t HAHA!

We met Lori, Don and the girls at the AAHOM and the kids had an absolute blast. I forgot how huge it is… it has 4 floors and a Mezzanine floor which is the Preschool Museum. I’m glad we went even though Porter (and probably the girls) didn’t really “get” the point of all the exhibits. It was fascinating for them regardless. This was Porter’s first time visiting and I think he was quite overwhelmed with everything to look at and do. He had a blast, regardless of being able to understand the exhibits. He loved toying around with everything he could get his hands on (and that was pretty much everything!). There is even a real ambulance in the museum, so he thought it was so neat to go inside it and “drive” it. I took a ton of pictures, of course, so be ready!

{Shae playing with the ball ramp in the Preschool Museum}

{Brenna and Porter jumping on the Spring Floor} 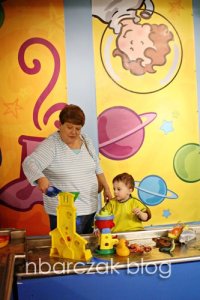 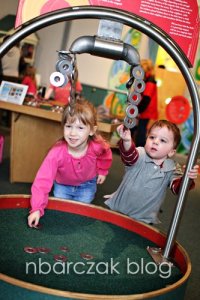 {Porter loves to pretend to unlock doors with keys. This was right up his alley!}

{Brenna in a big bubble}

{And, of course, all 4 of them together}
After the the museum we went to TGIF for lunch. Delicious and perfect way to end a decent afternoon.