Yesterday we spent the evening at my mom’s house with my grandma, mom, her boyfriend Brian, my sister and niece as well as my brother and his girlfriend. Heather and I took Aubri and Porter outside to try to catch a few pictures of them together like we did last year. I ended up with a couple cute ones, and a bunch of hilarious snowball fight pictures!

Interesting, eh… a snowball fight Easter weekend? Porter kept throwing snow at Aubri and she giggled as she ducked.

She finally got brave enough to throw some back at him. They had a blast for the 10 minutes or so we were out there messing around. 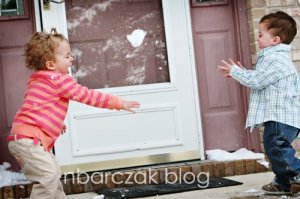 After they warmed up, we decided to dye Easter eggs. That entertained the 2 year olds for… oh… about 10 minutes and then Heather and I ended up dying the rest by ourselves. 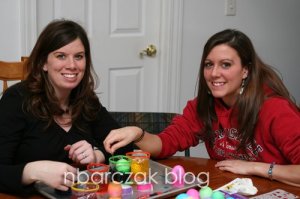 A little camera, a Finding Nemo kite (from the dollar store!), a plastic whale (a .50cent clearance steal from Toys R Us… Porter was probably most excited about that stupid whale!), a few mini play-dohs, eggs filled with just a couple jelly beans and some stickers, a cement mixer truck (leftover party favor from his b-day), a bunny straw and one of those “magic” towels from the dollar store… it is shaped like an egg and you put it in water and it turns into a towel.

E.B. hid eggs around the living room and left Porter’s basket on the way to mom and dad’s room. What a great bunny… mom and dad got to sleep in until 8 while Porter played with his loot! 🙂 He came in at 8 with his camera, whale and cement mixer truck and was thrilled as could be.

I woke up with him and cheered him on while he hunted for all his eggs… collecting them in his blue bunny basket from his first Easter. Here are a few pictures from this morning… 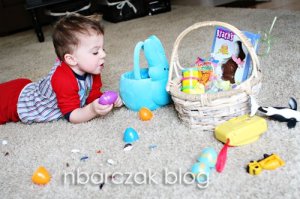 Grrr! Use those muscles! 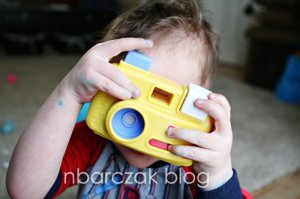 This afternoon we made our way up to Dearborn to spend the afternoon/evening with Ry’s family. We had an indoor Easter Egg Hunt- Lori had a TON of eggs. I bet about 100! They wer everywhere. The kids had a blast.

Here are just a few cute pics of the girls. They are getting so big! 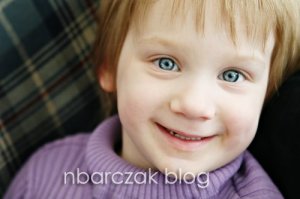 Brenna didn’t nap this afternoon and she was crashed in Papa’s arms by 6:30ish. When he got out of the chair, she just slithered down still asleep. 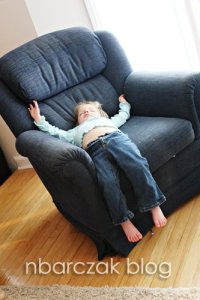 Sorry about the photo overload! I took a TON of pictures these past few days. I love when we get together with Porter’s cousins- its so fun to take pictures of them all!