I’m still alive and breathing and made it through my first (hear that… first… as in I am hoping to do MORE!) 5k race.

I literally had only ran oh… 5 times this past month to “train” for this 5k. Did I mention I was pregnant for 38 weeks of the past year, meaning I did ZERO running in that time?

I was very nervous about this race… anxious, excited and nervous. I signed up and thought WTH did I just do? I wasn’t sure what to expect and when we lined up for the race this girl looked at me and said “Are you wearing those [sunglasses] in the race?” Uh… yeah… they’re on my face and the race is about to begin so unless you think I’m just going to joyously toss them in the air as they fire the gun, YEAH I’m going to wear them. Dumbass. (its been quite a week with people saying blatantly rude/odd/stupid things to me… one is work related and I won’t write it on this blog).

Anyhow… the race started and my legs immediately began feeling like a tight rubberband. Ouch. I remembered running this week and how it felt that way but loosened up, which it did. Just in time for the first hill. HILL. HILL??? I didn’t practice on any hills! Well, I made it up that and by the time I was at top I was dying. I wasn’t sure I was going to make it through the race.

However, LeeAnn and the Energizer Bunny…. err… Tony… kept me going. We walked a few times for a minute or two (well, us girls did… Tony kept running in circles around us!), and we finished the race with a time of 35:03. I think we were 7th and 8th in our age category (which means nothing to me… we were probably last HAHA!)

Porter… oh Porter. He woke up this morning cranky. He didn’t sleep well last night- he hasn’t been sleeping well for the past week and I wake up in the morning and he’s in bed with us. Anyhow… excuses excuses, my kid is just a brat all morning. He was Cranky Franky (his alias most days), and whenever Lukas (who was in a chipper mood!) was goofing with him he would grumpily say “Go away! Leave me alone!” Niiiice…

By the time we finished racing, Porter was whiney. He wanted to go in this big blow up obstacle course so I took both boys through it- Porter whining the whole way.

Then we went to see the fire truck, which he was totally engrossed in. And then played a second of putt putt and then went to get sized for a free bicycle helmet. At this point, Porter laid down on the ground kicking and whining that he didn’t want to try it on. He wanted a helmet, but didn’t want her to size it for his head.

By the time it was race time he was falling fast. He whined about his number being pinned on. Wanted to carry his flipping helmet, wanted to be carried… the works. I finally tried to get him excited about the race, tried to get him into stretching with me (which he was having fun doing before my race) and once we lined up for the run he was only interested in the freaking fire truck, which was parked BEHIND the start line.

I knew it was a lost cause. He wanted Ryan to run with him. He wanted me to run with him. He wanted Ryan. Me. Blah blah. I re-told him all the things we’d talked about all week (in which he was so excited about all week… up until this day)… we were going to run so FAST and it was going to be FUN and there’d be a prize at the end and we’d cheer and say “Go Porter!” Well… the race started and he ran for about 20 feet and then was on the look-out for an escape route. I managed to carry/drag/pull him about halfway through the race (it was only 200m… so not far at all), thinking that he’d see everyone ahead of him and get motivated to run up and catch up to them and get his prize. He finally tried to flop on the ground so I picked him up and called it quits. We walked past the finish line- and all the kids with their little trophies, proudly showing them off. And of course Porter whines “I want a prize” and let me tell you, my answer back to him wasn’t sweet. I wanted so much for him to have stuck with it, finished the race and got his prize, and to be so proud of him and make him feel good about an accomplishment, but I guess that wasn’t in the cards for us today. I was so sad as we walked to the car. 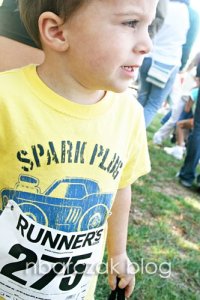 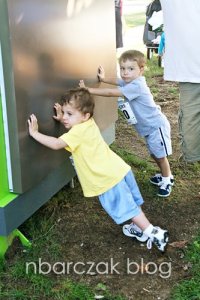 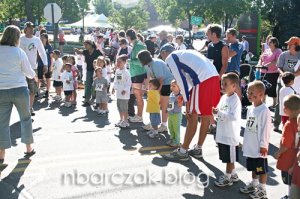 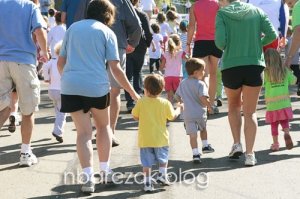 (oh lord… my ass is huge and I look like a hunch back! EWW! And don’t mind my dorky white tube socks… I am down to one pair of ankle socks and they were in the laundry!)

I’m almost embarrassed to day, but I’m so disappointed in my kid. I know that sounds stupid and it really is- he’s only 2.5 and what does it matter. Well, it DOES matter- to me. I want so much to have something FUN to do with Porter… something he’s interested in other than his fricking trucks. It seems that everyone else on the face of this earth has fun things that their kid is interested in and whenever I attempt to do something fun with Porter he’s either in an asshole of a mood or he’s totally unintersted. Unintersted, I can understand, but why the freaking hell does he have to ALWAYS (or so it seems) turn into Cranky Franky when we attempt to do something FUN. *sigh*

Needless to say, we went home and P ate lunch at 10:30 am and was in bed by 11am. Of course, we had our usual naptime battle for an hour and 15 minutes.

We’re going to try again… I think he’d enjoy it if he were in a good mood. We’ll see what happens. If not…. I still have Hudson, right? There is hope….