I’ve been addicted to Facebook as of late, and last night I read a few updates saying we had a Winter Weather Advisory and were expecting 6-12 inches. Ouch! I kind of hoped for a snow day (in April!!) and well, lucky me… we got it!

Yesterday it rained on and off all day, and by the evening the temps dropped and we had probably 6 inches of snow this morning. Trees were drooping from the weight of the ice and our neighbors tree fell on their swingset. I was cracking up reading all the Facebook updates today. No one was very happy about the snow. Understandable.

By 9am, Hudson was down for a nap and Porter and I bundled up and went outside to play in the snow. It was perfect packing snow so we made a couple snowmen… Porter’s first ever outside snowmen! They didn’t last for long… by this evening it had warmed up a bit and they fell over. 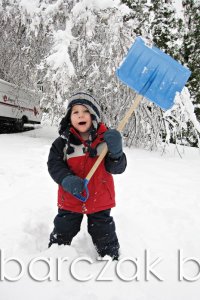 We pretty much spent our day hanging out… I was excited that it was chilly and had the perfect excuse to use our fireplace again! I love lazy days at home with the fire burning all day. I’m obsessed, and that cracks me up because moving in I didn’t give a rats booty about the fireplace working or not… I just liked the looks of it. Now, though, ooh I love my fireplace. 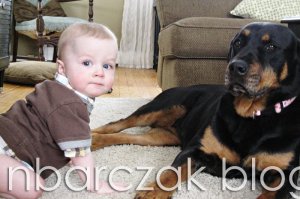 This evening was Porter’s first swim lesson. Ryan took him while Hudson and I went grocery shopping. Ryan took the camera and flip video but didn’t take any footage. He said that it took a bit of coaxing to get Porter in the water but he finally told the girl to just grab him and out him in the water. She did and as expected, he was fine. He just takes a little warming up. Ryan said they jumped off the edge of the pool, practiced keeping their mouths closed etc. From the sounds of it, it was a success. I hope this will build some confidence in Porter in the water.

Before bed I took a little video of Porter attempting to tell me about his swim lessons. He’s a little distractable. Not to mention it was way past his bedtime and he was antsy pantsy. I’ll have to post the video later… its uploading right now.