Mom heard of an Easter Egg Hunt in the Historic District of Beaufort.  We decided to take the boys and participate.  It was about a half hour drive in our mid-sized….err… mini car…. complete with mom squished inbetween the carseats in the back

Once we arrived, Ryan groaned.  Of course… he’s always a party pooper.  It was crowded and people were lined up on the streets.  We realized they were waiting by a white picket fence around a historic house for the hunt to begin.  All of a sudden, people began tossing their toddlers (under 3!) over the fence and kids were running everywhere.  I couldn’t hop the fence (wearing a dress), so I stood back and watched a handful of 2 year olds bawling at the chaos, looking for their parents.

I finally realized there was a gate (one tiny gate for the whole swarm of people… hence people shoving their kids over the fence).  I went in and found Hudson.  All the eggs were nearly gone… I saw many 5,6,7 year olds running by with baskets brimming full of eggs.  Someone took pity on Hudson and tossed an egg in front of him.  Before he even had a chance to notice it, a little girl about kindergarten age swooped by and scooped it up.  The dad rolled his eyes and handed me another egg that I showed Hudson and sat it down for him to pick up.  He got one single egg… one blue egg… but he was so happy about his one egg.  I decided it wasn’t worth fighting through the crowd to find Ryan and Porter so I headed back to the historic house where we started the hunt.  Mom was there so we sat on the porch and let Hudson enjoy is candy filled egg. 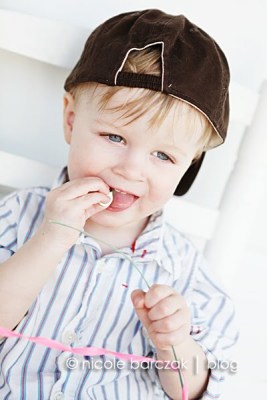 Ryan and Porter were still hunting for eggs…. I’m pretty sure they were all gone within 3 seconds of the hunt starting but leave it up to Ryan to think there were some tricky eggs hidden somewhere.  Did the 50 eggs laying in plain sight in the grass not tip him off?  HAHA!  My mom and I cracked up and finally they noticed us waiting and came to join us.

Porter’s basket cracked me up… he had ONLY green eggs.  When Ryan had finally caught up with him during the hunt he had 7 or 8 green eggs and he told Ryan he only wanted green eggs!  So funny that he managed to only get green.

When Porter saw that Hudson only got one egg he scoffed and looked upset and said… “Wait, I can give him some of mine!”  So sweet.  He did share a few eggs while we rested on the porch after the mad dash of chaos.

On our way back to Emerald Isle we stopped by Roma’s Pizza.  DELICIOUS!  And bonus… they were playing Cars on the tv.  YAY!  The boys were transfixed and we were able to enjoy lunch sans-whining.  Mom and I got stromboli… It was awesome… larger than my hand!  Huge.   Delicious!

Then we picked up the keys to the rental house and stopped in to drop the boys and I off.  The beach house is so so nice.  It has 4 bedrooms, 2 baths, and an open kitchen/dining/living room.  The beds sleep 10 plus a pull out couch.  And the deck is great- it walks out to the beach and has a shower to wash the sand off before we go back to the house.   Lucky, lucky us!  It’s going to be a great week! 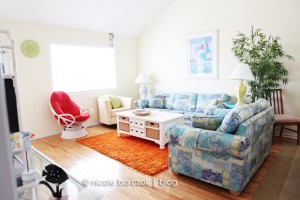 The view from our balcony:

I laid Hudson down for a nap and he was O.U.T.  So so precious.  I love staring at these angelic, sleeping faces.  If only they were so peaceful when awake… 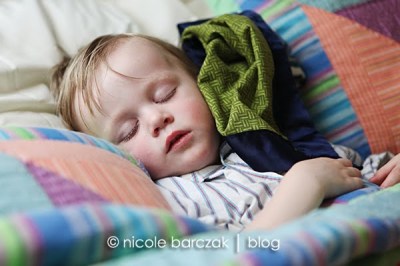 For dinner we walked on the beach down to my mom’s house and had dinner made by my mom and Mike’s friend who is some kind of gourmet chef.  More delicious food!  Steak and ribs and rice and yuumm…. so good.  His hat was hilarious.  At first I thought he just had a funky cool hairdo, but then realized it was fake hair…. aka Flair Hair!.  I love it!

We met Mike’s step-son and his wife and their kids… Chase, Jennifer, Ethan and Hailey.  They are very nice and I guess you’d call them my step-siblings.  Not sure what to label the ‘siblings’ when your parents marry once you’re an adult.  Anyhow, we really got along great with Chase and Jennifer and had a great time talking to them.  Wished we had longer to hang out.  Porter and Ethan got along very well, too.  I’m looking forward to next spring break… I think there are plans in the making for a huge beach house rental for all of us!