Oh yes, I am copying LeeAnn’s blog post title LOL!  Turns out, great minds think alike and she just happened to post before me.

This summer is flying by so quickly.  Its hard to believe it is halfway over!  I had originally wanted to spend my day at home catching up on some house projects.  But, LeeAnn invited us to join her at Nixon Pool and I decided that I needed to embrace the summer before it was over.
Luckily, the pool was not crowded at all today.  Normally, it is a madhouse and that is probably why I avoid Nixon at all costs.  Sure, its a great pool and perfect for kids but I hate feeling like I can’t find my kids in the mob of other kids.  Today, however, was perfect.   Jane and her kiddos joined us- we decided it was a little celebration for the twin’s 3-week birthday…. a Pool Party!  HAHA!
The kids had a lot of fun swimming.  Grace, Lukas, Porter and Hudson spent most of the time in the somewhat deep end with us, jumping off the side of the pool.  Porter and Lukas really enjoyed the polar bear slide as well.
Silly me, I forgot my point and shoot camera.  Its normally always in my purse but lately it has been parked on my desk at home.  So, the only shots I got are from my iPhone.  Next time I need to make sure to bring a camera for some decent shots. 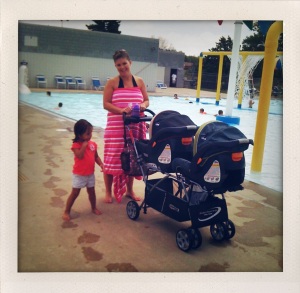 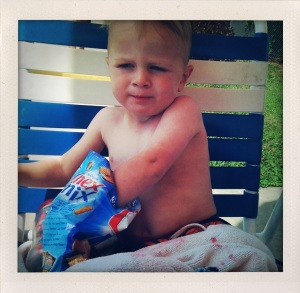 This evening I met back up with Jane and LeeAnn…. LeeAnn and I planned to surprise Jane with brownie sundaes since she and LeeAnn meet up on Mondays to watch The Bachelorette.  So, the 4 of us (L, J, Adam and I) had some deeeelish ice cream sundaes (soooo good….) and watched their show.  I’m not really into The Bachelorette (I’m more of a cat-fight-drama Real Housewives kinda girl) and I’m pretty sure I’m not invited back next week.  I sort of killed the mood for Jane and LeeAnn while they were staring dreamily at the guys while Ali was giving them their roses…. the guys’ anticipation over a no-brainer was pretty hilarious and I had to call out “How queer!” and kill the mood.  Oops!  Ah oh well… I got one fun evening in, I suppose HAHA!  Maybe I need to convert them to some REAL reality TV…..