Oh boy… I know, I know.  I’m slightly crazy.  Probably insane if you were being really honest.  But yes, we got PET RATS!  Oh my gosh they are SO DARN cute and entertaining.  It all started a few weeks ago….
One of the hermit crabs died and Porter was heartbroken.  So we headed to the petstore to get another hermit crab and I realized it was silly to spend almost $10 on a hermit crab.   They don’t DO anything.  Ours were literally buried in the sand 24/7.
Then the rats caught my eye.
Back in highschool I remember seeing a rat at the petstore… it looked kind of mangy (now after researching rats a bit I think it was a rex) but it was so friendly and playful.  I wanted to get it but my mom would never ever agree to getting a pet rat.  So, I got a guinea pig.  His name was Moose and he was so cute.  This was after a handful of hamsters I’d had (and newts and fish and cockatiels….  I loved animals!).
I realized… HEY!  *I* am the mom now!  We can get rats if we want!  So I started browsing Craigslist and checking out cage prices and researching rats as pets.  There were a few near misses in acquiring some pet rats but none worked out.  I was undecided on males or females (males being larger, calmer and cuddlier but having, ahem, big balls… females being smaller, more playful but more active).  Ideally I thought I’d love to have a neutered male but wasn’t about to spend $80 on neutering a RAT!
Well, my patience and research paid off.  I found someone on CL that had 2 month old baby rats to rehome… 7 females.  They were cute in the pictures.  When I called her she mentioned she also had 2 neutered males the same age.  SCORE!   To top it off… she was giving us a small cage with them.
So yesterday we went to Lansing to pick up our babies.  We got 2 females and 1 neutered male.  The cage her son gave us (she wasn’t home and turns out the son gave us a hamster cage instead of the decent sized rat cage) was a bit small for the 3 rats so we went to 3 petstores to check out cage prices.  Preuss Pets had a great one for $100.  Ick.  Pet Supplies Plus had some great ferret cages on clearance but the bar spacing was too far apart for rats.  PetSmart was our jackpot.  We scored a great sized cage with 2 levels for….. wait for it…. $8.97!  Less than $10 for a $50 cage!  YAY!
By the way, have you EVER tried to photograph rats?  Baby rats, at that… that are active and scurrying around?  Oh my.  I put them on the ironing board by a window and was able to get just a handful in focus.   Cricket (aptly named because she scurries and hops around!) decided to leap the 3 feet from the ironing board to the chair! 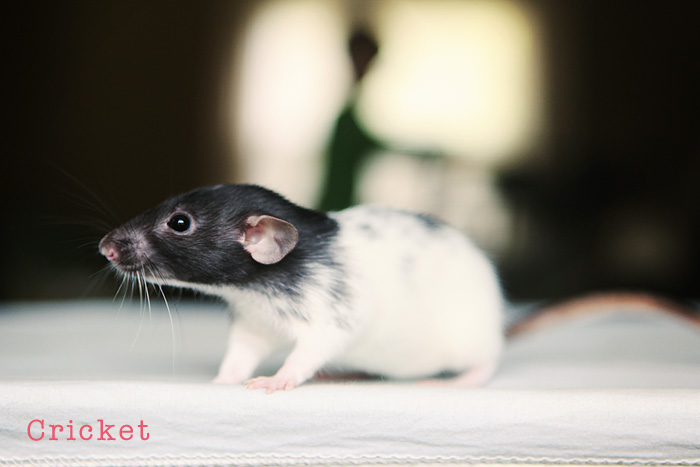