This morning, I packed Porters lunch for school as my 3 babies ate breakfast at the island.  Porter, typical of him, would eat a few bites and bounce around the kitchen, chattering about one thing or another.   I usually scold him and redirect him to his seat. He has boundless energy and I’m trying to accept this part of him.  This morning I didn’t reprimand him.  I found myself choked up as I watched him give his sissy Eskimo kisses and play GI Joes with his brother over pancakes and bananas.  I thought about all the mamas and daddies who did this same thing last Friday, not realizing it would be the last time they heard their 1st grader giggle, or talk about what they would do at recess, or hug them and say I love you.

I found myself wiping silent tears from my eyes as I thought about the families who lost their babies.  The breakfast tables that are a seat short this morning  The families who lost their only child who wake up to a childless home. The siblings who no longer have a comrade to play with before school.  The homes whose noise levels are a decibel lower than normal this morning.
After breakfast, I attempted to round them up to get their shoes and coats on.  They innocently turned the tv remotes into guns and talked about bombs and shooting things.  I winced at the words, though they meant nothing to the boys.  Its typical boy play to them, and the devastation that I learned about on Friday is incomprehensible to them.  I wish it were still incomprehensible to myself and the rest of the country.
I didn’t expect to feel so impacted this morning as I dropped Porter off.  I can’t help but put his school in  place of Sandy Hook.  His teacher in place of a Sandy Hook teacher.  His class in place of a Sandy Hook class.  The thought of a mass murderer barreling through the halls of his school, terrorizing classrooms of sweet, innocent children.  My children.  His friends, classmates, teachers, school staff.  People I know and love.  The thought is incomprehensible, yet now it has been done.  It could be any school.  Anywhere.
As I dropped Porter off, I tried to soak up every ounce of him.  His tender kiss before he leapt out of the van.  His shaggy hair sticking out of the bottom of the cheezy ballcap he traded a friend for a matchbox car.  His toothless grin as he turned and waved to me before bounding off towards the front doors of the school.  We never know when it will be the last.  We never know when the incomprehensible will happen. 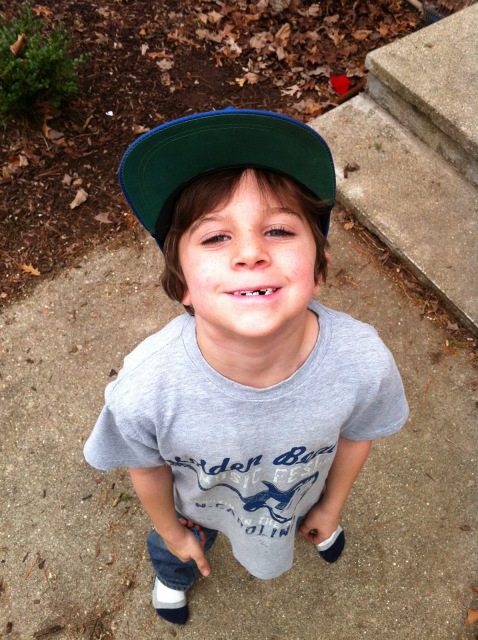