Porter has been asking me when he can volunteer at the Humane Society/Animal Shelter since spring break (he watched Animal Planet and saw a commercial about the homeless pets and was so sad about it). I finally called and he has to be 16 😦 He’s going to be so bummed!  We’ve been talking about doing some kind of fundraiser to help raise food, cat litter, toys, towels and money to donate to the animal shelter.

This boy always amazes me with his huge heart.  It always seems like the most unsuspecting times his tenderness shines through.  He really is so incredibly sweet and sensitive, once you get inside that rambunctious, all-boy exterior!

Lately he’s been really into stuffed animals.   The last month of school or so he took one of his stuffed dogs to school with him in his backpack.  He would tuck him in so his head was sticking out.  Then, a few weeks ago our neighbors had a garage sale and he brought home a little Dalmatian stuffed dog.  He named him Spot and has been toting him along everywhere.   Last week he and Hudson turned two large (LARGE) boxes into dog houses and he tucks his dogs in to sleep every night.  The other day we went to Ikea with my mom.  He fell in love with this huge stuffed dog and suckered my mom into buying him for him.  He’s been playing with that nonstop since he brought him home.  He takes “Samson” outside with him, on the trampoline, in the treehouse, etc.  At night he makes him a bed next to him with a pillow and blanket.   Love it love it love it. 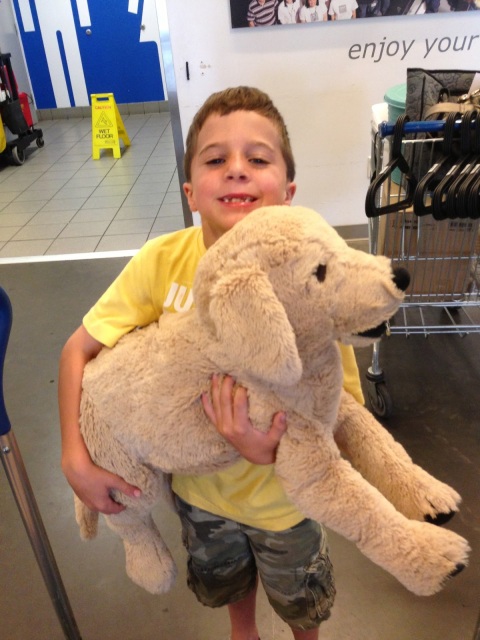