Where do I start? First off, I was totally unprepared for this party. Or, maybe I should say I just didn’t put as much thought and effort into it as last year. Decorations were close to nil… the theme was “Trucks”… construction trucks more specifically. His cake was in his big dump truck, he had his own little mini cake in a mini dump truck and we had some “themed” plates and some colored balloons. I wish I’d gotten more into it but ah, it was a good time regardless.

We had a mass of people there… mostly family (including 4 little girl cousins) and a few of P’s little friends: Lukas Howard, Donnie Huff and Reyna Collins. So, even though the guest list seemed contained, there were still close to 40 people there! Yikes.

Porter walked into the clubhouse and was a bit bewildered. He couldn’t figure out why Nina and Papa and Oma and Grandma and Aubri and everyone was in the SAME room. He spent the first half of his party clinging to my mom, Ry’s mom or one of us. I don’t think he really understood what the heck was going on. (Add that on top of having only an hour nap….). Anyhow, he finally warmed up and joined in the circus of kids running around and playing with the balloons. 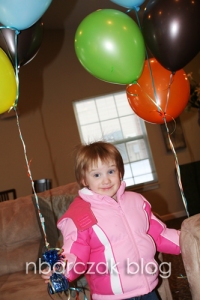 He was so funny when I pulled is dump truck (full of oreo-pudding-cake) out of the fridge. He wanted to play with it. He kept saying “All messy! Dirt in truck!” and then slyly asked for a spoon and attempted to reach up to the table and scoop some “dirt” out of it. He loved his little mini dump truck cake, although he couldn’t blow the candle out on his own. Lia found her way to the front of the crowd and took care of it for him.

After cake we opened presents. Porter was pretty excited at first (although by the pictures, and his lack of smile, you’d think otherwise… I swear this kid DOES smile… he always looks bewildered in pictures HAHA!), but after opening a few trucks he was so over presents.

{Check out the clan of little ones LOL!} 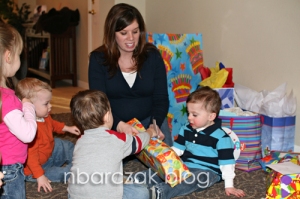 And once he opened the Big Yellow Hummer from Donnie, I was on my own to open the rest of his presents. How fun. LOL! 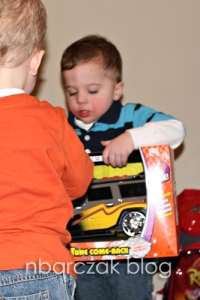 All in all, the day was great. It was nice to see everyone together, although I didn’t feel like I got to chat with many people. I loved seeing all the kids playing together. I’m sure Porter thought it was pretty cool to have his buddies and his cousins all together.