Ahhhh Saturday. Well, it started off rough. I could tell from the moment I woke up I was crabby and cranky and if I didn’t do something semi-structured with the kids I was going to lose. my. fricking. mind.

Katie and I had planned to meet up at the park with the kids. Sweet.

Then Porter found dog shit in the playroom.

Ryan cleaned it up.

Kids were whiny. Toddlers were loud and obnoxious.

Sat down in the playroom to dress Hudson.

I felt my bloodpressure rise.

Text to Ryan: “Your fucking dog pissed in the fucking playroom and I fucking sat in it.”

Removed Ikea rug (which has been peed on at least 6 times) to rinse off with the hose.

Cleaned up carpet in playroom.

Got out the door ON TIME, I should note, and decided to go to Toy House to find a book about butterflies. I had bought Aubri and Porter a live butterfly garden (Aubri’s for her b-day) and I wanted to get a book to go along with it.

Made it to Toy House. Note: Balloons all over parking lot.

I parked minutes before 10am and noticed multiple cars pull in at the same time.

What is going on?

Discuss Rules In The Store with Porter and Aubri. Make them recite them back to me.

Get P and A out. Manage to get both babies out and carry them both to the store. Wonder how I’m going to put both of them in a cart.

Put both babies in the front of the cart…. one baby for each leg hole.

The store is a madhouse. Turns out its their 30th anniversary “Birthday” and the store is mobbed. Great.

Kids are magnificent in the store. No meltdowns. No lost kids. Well, Porter did wander off for a moment to the ride on toys but I wouldn’t call that lost.

Found a butterfly book. Aubri picked out a Fairy Toy she wanted for her b-day.

Met an adult Hudson! Neat! Had lots of gawks and comments from the employees about bringing 4 young children in.

Got all children in car. Toy House excursion: SUCCESS!!

Met Katie and her boys at the park. Super relaxing time, kids played well, ate lunch, had a blast. 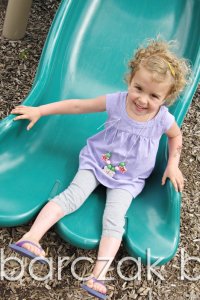 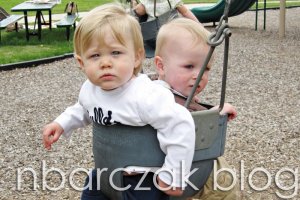 These 2 little monkeys cracked me up. I hope they grow up to be buddies like Porter and Donnie are. 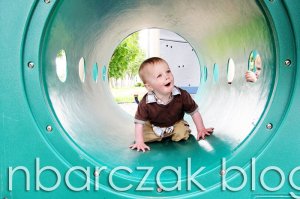 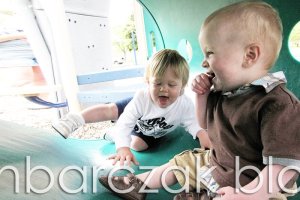 Made it home and got all 4 kids down for a nap. I took a siesta on the couch after reading a bit of the Multiple Bles8ings book I borrowed from a co-worker.

Heather and Ryan got home (Ry was golfing with co-workers).

YAY! Made it through the hard part of the day!

We decided to rip out the dead/ugly bushes in the front of the house. Ryan loves his truck. Porter was still sleeping after we pulled the first one out. I ran upstairs to wake him up and said “Porter! OH my gosh come look what daddy is doing to my front yard!”

The first thing he notices is “Why is daddy’s truck in the yard!?” Not… why is the bush in the middle of the yard and dirt all over the walkway.

I play along… “Oh my goodness, what is going on! My plants!”

So funny. Porter has the funniest expressions. He then got into ripping out the bushes and wanted to help. Everytime Ry would get the bush out he’d say “That was a great job, dad!” 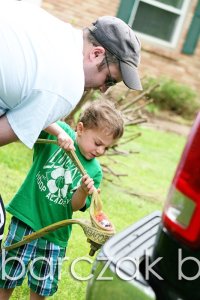 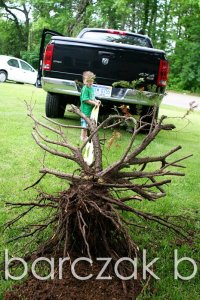 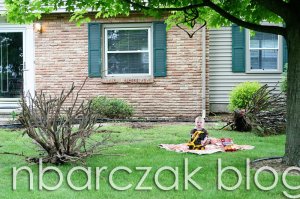 After the bushes were out and cleaned up we grilled out and the boys played. Hudson got daring! He had been trying, and succeeding, at climbing onto his ride-on toys all afternoon. He decided to get daring and stand up on his car! 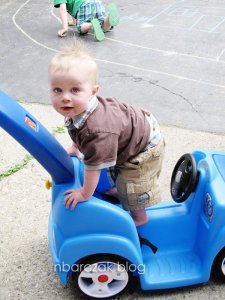 I helped Porter draw a road in the driveway, complete with houses for the boys and driveways next to their houses. 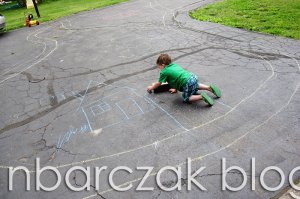 Porter had fun pushing Hudson around the “road”.

Then we found a caterpillar, which Porter named “Pluto” but he says “I call him Caterpilly” 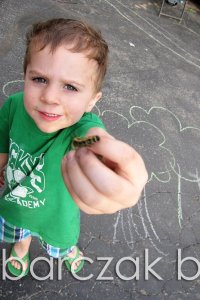 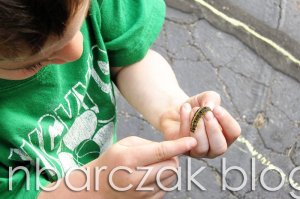 And the end to our day…. I put up the Hammock Chair I bought for $5 at a garage sale on Friday. I put it under the treehouse and its a perfect spot! Its a little gaudy with the colors, but oh well. It’ll be fun to sit and relax and let the boys play this summer!