Skip to content
Porter, school, the things they say, What the hell!

Yesterday Porter was dropped off after school by the parent of a little girl who rides his bus (who lives two stops before his).  I asked him why he wasn’t on the bus, and why someone else dropped him off and he said “Miss Dawn had to roll her windows up in her car and it was raining so I got off at Trinity’s stop at the blue house.”  I thought it sounded weird, but I’ve met Dawn, and Ryan and his dad know her from her other job (waitress at a local lunch spot they go to) and I trust her completely- she’s always been very protective and concerned with Porter’s safety on the bus.   I kind of shrugged it off as maybe there was an emergency or something, and Dawn had asked a parent to run him down the road.  Odd, yes, but I assumed there was a reason.

This morning, as we drove to school, I asked a few more questions about the drop off… was he the last kid on the bus?  Did she drop anyone off after him?  Where was her car?  (oddly, he said her car was at the bus yard, which is right by our house… hmmm..) So, it started to sound kind of fishy/weird but again, he was safe and I just kind of shrugged it off.

Well, Miss Dawn just dropped him off and brought him up to the door to explain….

What turns out had happened…. it was raining/storming and that particular stop has like 7 kids that get off, and sometimes they’re pokey.  So she had made the comment “Everyone needs to get on this side of the bus and hurry off”.  Porter took that as an “EVERYONE” as in… him as well!  He is the last kid to be dropped off (and the girl who gets off one stop before him wasn’t on the bus… so he thought she needed to get to her car asap and let him off at Trinity’s stop!!)  So, somehow his short little self scurried off the bus, and THANK GOODNESS there was a parent there that he must have asked to take him home.  I’m not sure what he’d have done if no other parents had been home!

It cracks me up because that is SO Porter… take it into his own hands and just be Mr. Independent.  Most kindergardeners would probably be freaked out at the thought of getting off at an unfamiliar stop, or something off schedule.  Porter?  Nope.  Ask him to get off at some random stop and he’s a-okay with it.  He’ll figure out how to get home!  HAHA!

Last night he had told me maybe he should ride his bike to school and back.  Uhm… no way.   And a few months ago I’d told Porter he needed to ride the bus on a Friday because Hudson and I were going to Ann Arbor for the day (and riding the bus give me an additional hour to get home in time to get him off the bus) and Porter tells me as he hops out of the van to go to school  “Okay, and if you’re not home I’ll just break in the house and wait for you.”  Oh, Porter…. 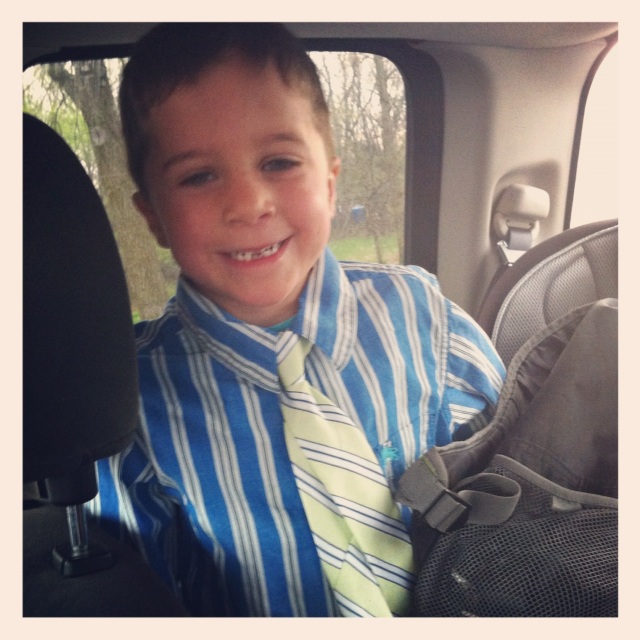 And today Porter picked out this outfit to wear.  He was so confident until he got to school… then he said “Now the girls are gonna look at me!” And he walked into school with his backpack on his chest.  Silly boy.